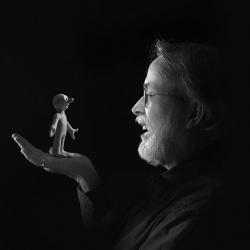 Peter Lord is Creative Director of Aardman Animations, which he co-founded in 1972 with David Sproxton. Their breakthrough success was the character Morph.

They developed the technique of stop motion animation which became the company’s hallmark. In the 1980’s and 90’s Peter directed a series of independent short films, and in 2000 he co-directed, with Nick Park, Aardman’s first feature film Chicken Run.

Peter has been intimately involved as executive producer, producer or director on feature film such as:  Flushed Away, The Curse of the Were-Rabbit, Arthur Christmas, The Pirates! In an Adventure with Scientists, Shaun the Sheep the Movie, Early Man and Shaun the Sheep Movie: Farmageddon (2019), the studios latest feature films produced with distribution partners STUDIOCANAL.

As a director, Peter has been honoured with three Academy Award® nominations.

The real answer, the true one is, I’m sorry to say, The Wrong Trousers. That’s got to be favourite. But as that answer might look a little self-serving, I’ll smoothly slide it back into the pack and proceed with Mark Baker’s Hill Farm, which is lovely to look at, subtle, warm – and funny of course. It’s got this elegiac mood and it’s about simple things – the storm and the bear and the drought and the tourists – but told with great cleverness and wit. It surprises repeatedly – and looks beautiful still.

I mean, I suppose there’s a couple of monsters out there (I almost hope there are, otherwise we’d be weird in a Stepford Wives kind of way) but as a group, as a community, you couldn’t hope to meet a lovelier bunch of people than Animation People. We’re an amazingly generous, supportive crowd and by some miracle very free of the sort of ugly competitiveness that you see in other industries.

Whoever we are, wherever we come from, if we’re making animation in Britain we just want to be ourselves.  That means we want to tell the stories that entertain us and mean something to us. We want to speak to our own histories and life experiences in our authentic language.

And all we ask in return is for the rest of the World to get us. Is that too much to ask?

Come on Rest of the World, try to keep up.