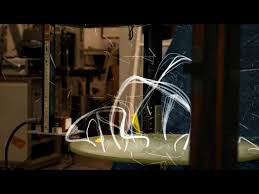 The secret lives of invisible magnetic fields are revealed as chaotic ever-changing geometrics. All action takes place around NASA’s Space Sciences Laboratories, UC Berkeley, to recordings of space scientists describing their discoveries. Actual VLF audio recordings control the evoloution of the fields as they delve into our inaudible surroundings, revealing recurrent ‘whistlers’ produced by fleeting electrons. Are we observing a series of scientific experiments, the universe in flux, or a docmentary of a fictional world?