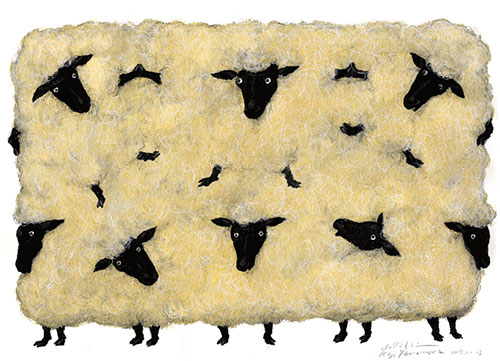 Koji Yamamura born in 1964. During the 1990s, He refined his style, spending much of his time making films for children. Nominated for an Oscar for Best Animated Short, “Mt. Head” marked a turning point, he to a place among the world’ s top animation filmmakers by “The Old Crocodile” (2005), “Franz Kafka’ s A Country Doctor” (2007) and “Muybridge’s Strings”(2011). Those films got awarded more than 90 prizes include the grand prizes of 4th big animation festival, Annecy, Zagreb, Ottawa and Hiroshima.
He is membership of the Academy of Motion Picture Arts and Sciences, a professor of Tokyo University of the Arts.

Free travel to the festivals.

From an old Japanese song.

The White Sheep sent a letter to the Black Sheep.

The Black Sheep ate it up before he’d read it.

Dear White Sheep, What was in that letter you wrote?

The Black Sheep sent a letter to the White Sheep…