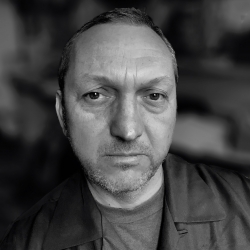 Jonathan Hodgson is an independent animator based in London. He studied at Liverpool Polytechnic and the Royal College of Art. His short films have won many international awards including two BAFTAs. He has worked on numerous advertising campaigns, music videos, features and documentaries including the groundbreaking drama-documentary-animation hybrid The Age of Stupid and Wonderland: The Trouble with Love and Sex, the first full length animated documentary on British TV. He has lectured extensively in the UK and abroad and since 2008 has been course leader of the Animation degree at Middlesex University. He continues to combine teaching with animated filmmaking and his recently completed short animated film Roughhouse, made in France with financial support from CNC and Arte.

You’re too old at 35, which means you won’t have to direct another soap powder commercial for the rest of your life.

Becoming an animator is a bit like choosing to become a heroin addict: you’ll be permanently penniless, ruin all your relationships and spend your summers sitting motionless in a dark cellar, while everyone else is out in the sunshine having fun.