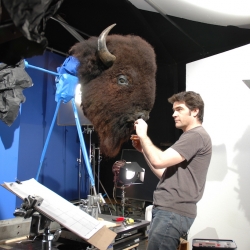 Stop Motion Director Anthony Farquhar Smith is known for his story telling and original animation style. Whether working with feature film directors like Wes Anderson and Tim Burton, or directing numerous television commercials and programs, he is known for his ability to bring inanimate objects to life and to give them personality and feeling. In his technical approach Anthony uses both traditional stop motion techniques and modern digital tools, but whatever the method his craft always drives the particular story being told.