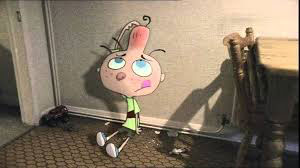 This combination of documentary style, live action and animation shows a disturbing encounter between a ‘real’ father and his son, who is represented as an animated character.  It uses the conventions of violence in cartoons such as Tom & Jerry to underline the horror of real violence.